My great uncle Karl told me years ago that his father John Charles Konzen (my great grandfather) had gone to business college in Cedar Rapids and that he had taught at the college afterward.  I’ve never been able to find any information about him going there or teaching until Michelle found out that old New Hampton newspapers were going to be online.  For some reason, I thought I had heard that these papers no longer existed (maybe I just told myself that to feel better about never making it to the archives in Iowa to look at the papers on microfilm – who knows).

The newspapers are a treasure trove of John Charles (and his siblings)!  And yes, they talk about him going to college in Cedar Rapids.  According to the 19 Dec 1889 edition of the New Hampton Courier, John Charles was traveling to Cedar Rapids for school.

“J. C. Konzen of Jacksonville started Monday for Cedar Rapids to attend school in that goodly city of railroads and business enterprise.  J. C. is a student and thinker, and will make every hour of his stay in Cedar Rapids, sixty minutes of application to study or legitimate rest.”

The 27 Mar 1890 issue of the Courier says “J. C. Konzen is making this vicinity a short visit.  He reports good success at the Cedar Rapids Business College, to which he will return in the near future.”  On 8 Jan 1891 the New Hampton Courier reports that John Charles will be attending school in another town.

“J. C. Konzen, who has been attending school at Cedar Rapids for the past year, spent the holidays at home with his friends.  He goes now to Cedar Falls to school.  J. C. will reach a first class place in his chosen work, if steady industry will accomplish it.”

I had never heard of John Charles attending school anywhere but Cedar Rapids, so unfortunately I do not know the reasons behind it.  In the 3 Sep 1891 issue of the Courier, John Charles is heading westward to teach in Kansas.

“J. C. Konzen was in town last week, he has been attending school in Cedar Rapids and now goes to Emporia Kansas to teach.  He intends to make his way through college.  J. C. is a worthy young man and we predict will make his mark in the world.”

A week later on 10 Sep 1891 the Courier reports that John Charles is in Emporia and “has taken charge of the penmanship department of Parker’s Business College.”  On 21 Jan 1892, John Charles is quoted in the New Hampton Courier as saying “‘I am getting along nicely with my school and am well pleased with the country.'”

“J. C. Konzen, one of Chickasaw county’s bright boys, who is seeking his fortune in the West, writes us from Emporia, Kansas, where he is now located, and he says, ‘I am getting along nicely with my school and am well pleased with the country.’  We are glad to hear of his success.” 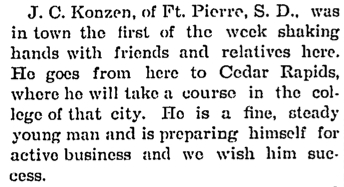 “J. C. Konzen, of Ft. Pierre, S. D., was in town the first of the week shaking hands with friends and relatives here.  He goes from here to Cedar Rapids, where he will take a course in the college of that city.  He is a fine, steady young man and is preparing himself for active business and we wish him success.”

Almost three years later on 23 Jun 1898 the New Hampton Courier says “Mr. Konzen has been in Ft. Pierre for some time and has made a fine reputation as a business man.”

“J. C. Konzen, of Ft. Pierre, South Dakota came down to attend the wedding of his sister and will remain for a few weeks.  Mr. Konzen has been in Ft. Pierre for some time and has made a fine reputation as a business man.  He is one of many young men who have gone out from this county and started in business and made a success, but he had a good capital to start with for habits of industry, sobriety and frugality make a splendid capital for a young man and such are sure to succeed.”

So from the New Hampton Courier articles, I now know he did teach at a college, just maybe not at Cedar Rapids Business College.  After 1898, there’s not much more information about John Charles, but in 1903 he is living in Montevideo, Minnesota.  John Charles lived out the rest of his life in Montevideo, where he owned a successful furniture store.  He met my great grandmother Ella Kuske – a teacher – and they married on 20 Jan 1914 in Olivia, Minnesota.  The couple had three children: Kermit, Kathryn, and Karl.

The family survived Ella’s bout of Scarlet Fever and the Great Depression together.  In the 1940 census, John Charles was 70 years old and he had worked 60 hours in the week prior to the census.  He had worked 52 weeks in 1939, but he earned $0 in income during 1939.  The census did note that he’d earned some non-cash income, but it’s hard to imagine that amounting to much.

John Charles, Kathryn, Ella, and Karl on Karl’s final furlough before he shipped out to Europe.  This is most likely the final photo taken of John Charles because he died soon afterward.

John Charles and Ella lived a very happy life together until he died of a heart attack on 17 Nov 1942 at his home in Montevideo.