John Konzen was born in Jun 1825 in Kruchten, Germany, and he died in Jan 1885 presumably in Chickasaw, Iowa.

Katherine Pitz Konzen was born May 1828 in Mettendorf, Germany, and she died in 16 Jan 1917 in New Hampton, Chickasaw, Iowa. 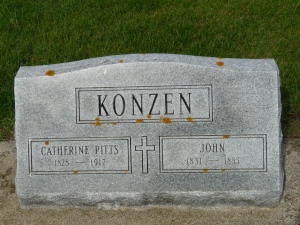 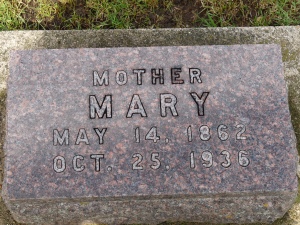 From Calvary Cemetery, we headed to Alta Vista’s Union and Calvary cemeteries.  In Alta Vista Union we found some Joachims, but nobody directly related to us.  At Alta Vista Calvary, we found some goats that must be descended from goats that our ancestors owned : ) and some Roethlers, Kramers, Hentges, and Mishaks.  We all realized during that morning that camera batteries don’t last long at all when you take pictures of hundreds of graves!

Then we moved on to Ries central – St. Mary’s Catholic cemetery in North Washington.  From North Washington we headed back to New Hampton for lunch and then out to Lawler for Lawler Cemetery or Utica Township Cemetery, also known as “the cemetery on diagonal road”.  The cemetery was supposed to be on the 1800 block of the road, but we spotted it on the 1900 block and I veered off the road like we were never going to see it again (only hardcore genealogists  – or hardcore Konzens – drive like crazy people to cemeteries).  According to Iowa’s WPA graves and Chickasaw County Genealogical Society’s cemetery indexes, Mathias Konzen’s son John Konzen is buried in Lawler Cemetery so we were seeking his grave and maybe his wife’s.

Lawler Cemetery – not in mint condition

Once we managed to open the gate to the cemetery, we started exploring the fairly sparse cemetery for John Konzen.  The ground was kind of bumpy and there was a large open area between a few graves where we decided the cemetery could definitely expand with many more graves.  We found some recent graves and some very old graves, but we didn’t find any graves with familiar names let alone John’s grave.  The three of us weren’t sure what to make of this and we had to look over some of the graves again before we finally decided that we must have the wrong cemetery.  Maybe the cemetery we were at was a private cemetery – after all it didn’t have a sign – and there was another cemetery on the diagonal road that was actually on the 1800 block and not at the corner of the 1900 block and the 1800 block.

Michelle, Sandy, and I jumped back into the car and continued down the road, once we got to about the 1400 block we agreed the cemetery couldn’t be any farther and we turned around to head back toward Lawler.  We kept an eye out for the cemetery, but we didn’t see any new ones.  Once we returned to Lawler, Sandy asked at City Hall if they knew where Lawler Cemetery was, they had no idea, but directed us to a private cemetery (we weren’t willing to trek through somebody’s field to it).  They also told us that the courthouse in New Hampton would probably know the location of our cemetery.  While Sandy was asking questions she managed to ask some guys talking on the street if they knew any Pitzes – and of course they knew where some lived.  We decided to pursue the cemetery instead of chasing after long-lost relatives.

The three of us headed out to Little Turkey in case that was the Lawler cemetery that John was buried in.  The first cemetery in Little Turkey that we stumbled upon was an abandoned Methodist cemetery and the grass was so high that we didn’t want to search through it.  A little farther down the road was Little Turkey’s St. Mary’s Cemetery.  And John wasn’t there either, so we went back to New Hampton to dig through the library obituaries again and to look through the Chickasaw Genealogy cemetery books again.  And there it was, John Konzen buried in Lawler Cemetery, “the cemetery on diagonal road”.

I found the phone number for a member of Chickasaw Genealogy and called her and quizzed her about John.  She told me that the cemetery we found was Lawler Cemetery and once she looked through her records she informed me that she hadn’t been able to find his grave when she was at the cemetery in 1999.  What does the mean?  She continued to tell me that the cemetery had been neglected and basically abandoned at that time and the grass had been above her knees.  So I asked if the fact that John had been at the cemetery when they indexed it in the ’80s, but wasn’t there when she’d gone through the cemetery in 1999, did that mean that his grave had been moved?  She replied, “It probably sunk.”  What?  Apparently it’s very common in Chickasaw County (I don’t know about anywhere else) for graves to sink.

This lady then told me that they’d done restoration at a few cemeteries, but they hadn’t gotten around to Lawler Cemetery yet.  How do they do this restoration?  Well, this couple walks around with a big metal stick and they poke it in the ground until they find a headstone.  Yep, that’s really how they do it!  I was expecting her to tell me that they use radar equipment or a metal detector or something, but they just really use a metal rod.  I was floored by that whole conversation and when I told Sandy and Michelle everything that the lady had told me, they couldn’t believe it either.

At the Lawler Cemetery, we probably stood right on top of John’s grave when we were talking about how many more graves they could fit into the cemetery.  Maybe that’s why the ground was so uneven?  Then we started thinking that maybe my great great grandfather John’s children Katherine and Theresa are also buried next to Frank and Ellen at Reilly Ridge, but that there graves maybe sank.  Who knows?

So my new plan is to get a big stick and start poking around for graves and then digging them up.  Just as soon as I can get back to Iowa…  It infuriated me when we were in Iowa and it still makes me angry now that the caretakers of these graveyards allowed any graves to sink.  You’d think they’d be able to stop the process with much less money and effort if they did something as soon the graves started to sink.

I’ve always thought we should exhume my great great grandfather John Konzen and maybe Angela Susanna or Catherine Konzen and do DNA testing to see how they are related to each other.  So Michelle and Paula always tease me about wanting to do exhumation and now I’m the “exhumation expert” thanks to Michelle : )  It’s very ironic that I now have some graves that need to be dug up.  If you ever drive by a graveyard in Iowa and you see someone walking around with a big metal stick, I guess you’ll know what they are doing – and I could be the person with the stick!