We started our 4th day with a Starbucks run and then a wild journey up one of Dubuque’s bluffs and through some alleys (thanks to the excellent navigation skills of the GPS) to the massive Mount Calvary Cemetery.  The three of us split up to take on the cemetery and we still didn’t come near finishing the cemetery – or even a quarter of it – before we had to leave! 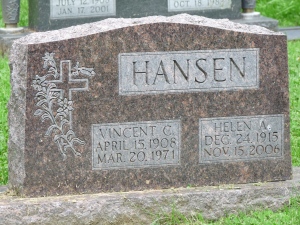 Then the three of us journeyed back down the bluff and up the next to Vernon’s house.  We had lunch together and discussed family history and connections.  Vernon showed us the many genealogy books he’s written on different branches of his family.  His dedication to family research was amazing along with his organization.  He had notebooks full of research and binders of obituaries organized. 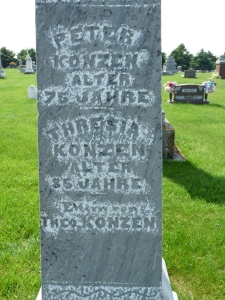 In Holy Cross, I realized how incredible it really was to be visiting my great great great grandparents’ graves (Peter & Theresa Konzen) and being somewhere my 3x great grandparents actually lived.  Holy Cross is a cute little town in the rolling countryside outside of Dubuque.  Inside the Holy Cross Church, there’s a stained glass window that Theodore and Marie Konzen donated money for to the church – which even increased my feelings about visiting Holy Cross.

We made the quick trip from Holy Cross to Luxemburg’s Holy Trinity Cemetery, where we found many gravestones of people who were born in Mettendorf, Luxembourg.  Mettendorf is now in Germany (the result of over 100 years of border changes) and it is only four and a half miles away from Kruchten, Germany, where Peter Konzen & Theresa Wolff were married and had their children (Johan Mathias, Margaretha, Theodore, Joannes, Anton, and Maria).  Judging from the cemetery, Luxemburg, Iowa, was aptly named, such a large number of Luxembourg immigrants are buried there! One of the Luxembourgers buried there was Michael Kohnen (maybe some relation?), his gravestone says he was born in Niederfeulen, Luxembourg, which is about 29.7 kilometers from Kruchten, Germany.

Theresa Konzen Duster’s headstone. It says she was born in Kruchten – if only we’d seen that a long time ago! 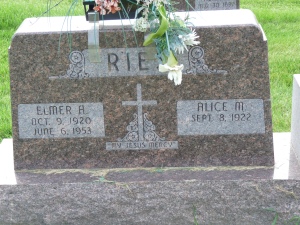 There weren’t many direct relatives of the Konzens in Sts. Peter and Paul Cemetery in Petersburg, but we found some of Sandy’s relatives and a large Putz family. I found Pitz spelled as Putz in some records, so maybe these Putzes are Pitz relatives. Everett Klostermann (Son of John Joseph Klostermann & Catherine Nurre) & his wife Bernice and Nathan Maiers (John B Maiers & Mary Pasker’s son) & his wife Laurine were buried in the cemetery.