Skip to primary content
Skip to secondary content
According to parish records in Kruchten, Germany, Peter Konzen (1789-about 1863) was born in Lellig.  The three of us discovered that Lellig, Luxembourg, is approximately 30 kilometers or 17 miles from Kruchten – which obviously would’ve taken much longer to travel in the 1800s.  Michelle ordered a microfilm of Lellig parish records for the years 1682-1793 and in the film she found Peter Konzen and his parents and siblings.

Peter Konzen’s parents are Theodore Konzen and Catherine Schuler/Scholer/Scholersch and they were married in Lellig on January 28, 1778.

Theodore Konzen & Catherine Schuler’s marriage record. Very roughly translated it says “January 28, 1778, the assistant of God to join…from the Wm. Excellmi my bishop a myriad…gaze of our married sacrament… For the clan proclamation from the honorable adolescents Theodore Konzen from Herborn and Catherine Scholer from Lellig. Witnesses required son my…domestic the above-named here.” 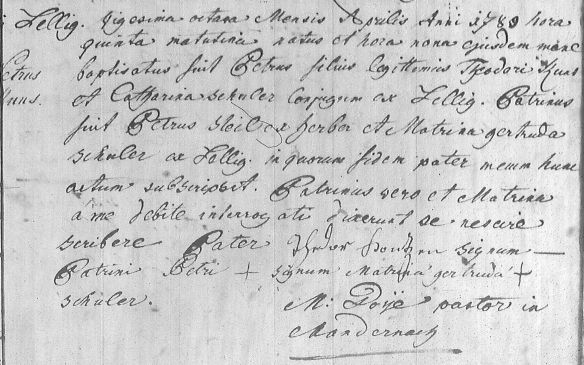 The birth and baptism record of Peter Konzen (the future husband of Theresa Wolff). It reads something like “In Lellig, on the twenty-eighth day of the month of April, 1789, at the fifth hour in the morning, Peter Konzen was born and baptized at the ninth hour of the same morning. Peter’s the legitimate son of Theodore Konzen and Catherine Schuler married from Lellig. Peter Gleil from Herborn was the godfather and Gertrude Schuler from Lellig was the godmother. They subscribed to my Father good faith in this act. The godfather, on this very day, and the godmother were duly questioned by me and they said that they didn’t know how to write, Father. Signatures. M. Doye, pastor in Manternach.”

On January 14, 1794, Joannes Konzen was born in Lellig and he died on July 7, 1796 in Lellig.  A baby girl (her name looks like Marie on the record) Konzen was born on July 8, 1795, in Lellig and she died there on the same day.  Then another Wilhelm Konzen was born on April 23, 1797 in Lellig.  We’re assuming that the first Peter (born in 1784) and the first Wilhelm (born in 1783) both died before 1789 and 1797, respectively.  It would explain why Catherine and Theodore named two of their children Peter and Wilhelm since it was a common practice to name during that time period to name children after one of their recently deceased children.

This Lellig information combined with the Kruchten records and family group sheets has led us to believe that Angela Susanna and Catherine Konzen were children of Wilhelm (born in 1797).  We’re hoping to find some proof of that soon!

Here are the rest of the Lellig and Manternach birth and death records: 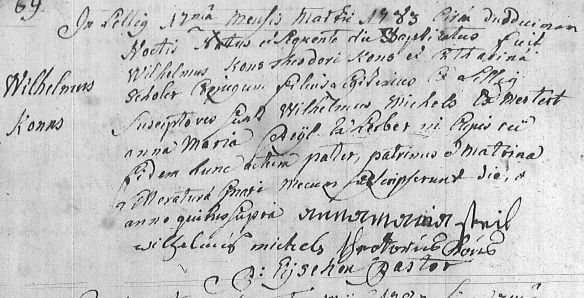 Wilhelm Konzen – “In Lellig, March 17, 1783, Wilhelm Konzen was born about the night of the tenth day and the following day he was baptized. He was the legitimate son of Theodore Konzen and Catherine Scholer married from the Lellig. Godparents are Wilhelm Michels of Mertert and Anna Maria Aeyl of Herborn. Had it not been for their act of faith…, Father, godfather and godmother…none, their notes with me right on the day and year above.” 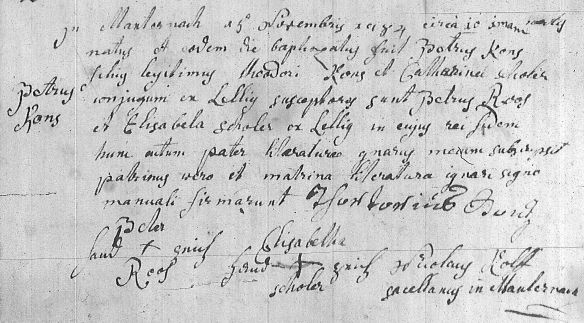 Peter Konzen – “In Manternach, November 15, 1784, about nine in the morning Peter Konzen was born and baptized on the same day. The legitimate son of Theodore Konzen and Catherine Scholer, married of Lellig. Godparents were Peter Roos and Elizabeth Scholer from Lellig,..knowing my faith whereof this act the father subscribed to a godfather, however, and a godmother ignore the sign and had defended an insignificant…manual. Nicholas Kolf, chaplain in Manternach.”

Elisabeth Konzen – “In Lellig, January 21, 1787, Elisabeth Konzen was born and baptized on the same day. The legitimate daughter of Theodore Konzen and Catherine Schuler, married, of Lellig. The godparents were Wilhelm Michels from Morton and Elizabeth Geiger, the right of faith.” 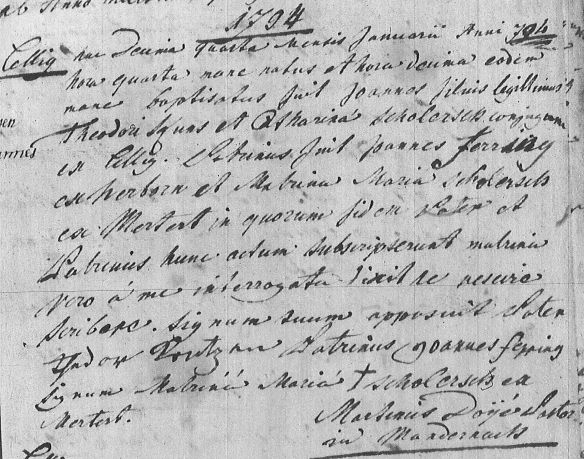 Joannes Konzen – “In Lellig, this fourteenth day of the month January of the year 1794 was born the fourth hour of the morning and was baptized John at the same at four o’clock in the morning. The legitimate son of Theodore Konzen and Catherine Scholersch married in Lellig. Godfather is John Ferriday from Herborn and godmother is Maria Scholersch from Mertert, in their faith in the father. And the godfather this act stated in their notes the godmother, but I asked them…not to know to write a sign before his father.”

Baby Girl Konzen (her name appears to be Marie) – “In Lellig, on the eighth day of the month of July, 1795, about the seventh hour of the morning, born by midwives baptized Marie and died after birth the legitimate daughter of Theodore Konzen and Catharina Schuler married from Lellig. Mestor Mart Doye, pastor in Manternach.”

Joannes Konzen – “In Lellig, on the seventh of July, 1796, died at the fifth hour in the morning, John Konzen living two years old, legitimate son of Theodore Konzen, a farmer from Lellig, and his wife Catherine Scholer. Mart Doye, Pastor in Manternach.”

Wilhelm Konzen – “In Lellig, this twenty-third day of the month of April of the year 1797, the fourth hour of the morning born early in the morning and the same day baptized Wilhelm the legitimate son of Theodore Konzen et Catherine Schuler from Lellig. Godfather Wilhelm Michels from Mertert and godmother Angela Hubert from Manternach, their faith in the Father and…in this act written below. But,…the godmother doesn’t know how to write, so she’ll make her mark.”

Sorry, it’s taken me awhile to write a new post, I’ve been caught up in our Konzen search.  So some more news about the Konzen search.

Michelle, Paula, and I have been hard at work attempting to unravel the mystery of the Konzens.  Sometimes we start thinking that it shouldn’t be this hard to find them and when we are far past frustrated we – well, maybe it’s just me – start throwing around crazy theories to explain why our Konzens are so hard to find.  Some of my favorite theories are that the Konzens must have been running from the law, they were trying to thwart the efforts of their future descendants, or that they never stayed in one place for more than one generation.

In the microfilms of Kruchten’s parish records, we found out that Mathias (we’d thought he must have been one of their kids since he arrived on the same ship as Peter, Theresa, and Theodore’s family) was a child of Peter and Theresa Konzen.  We also found three more children of Peter and Theresa – Marie, Anton, and Margaretha.  At first, we’d believed that Marie was Catherine because their birthdates were so close, but then we couldn’t also find a record for Angela Susanna.  So Michelle wrote to the Catholic Church in Kruchten and they sent her some family group sheets.

According to the family group sheets (which were compiled from parish records), Peter and Theresa only had six kids – Johann Mathias, Theodore, Joannes, Margaretha, Marie, and Anton – and Marie and Anton died in Kruchten.  So Catherine and Angela Susanna are not children of Peter and Theresa, as Michelle, Paula, and I – along with many other people – had thought.

Michelle searched through a film of a Fohren family book, but she didn’t find Angela or Catherine either.  I’ll let you know about some more developments soon!

Here are some more pages from the Kruchten family book:

Pictures of the Kruchten catholic church. 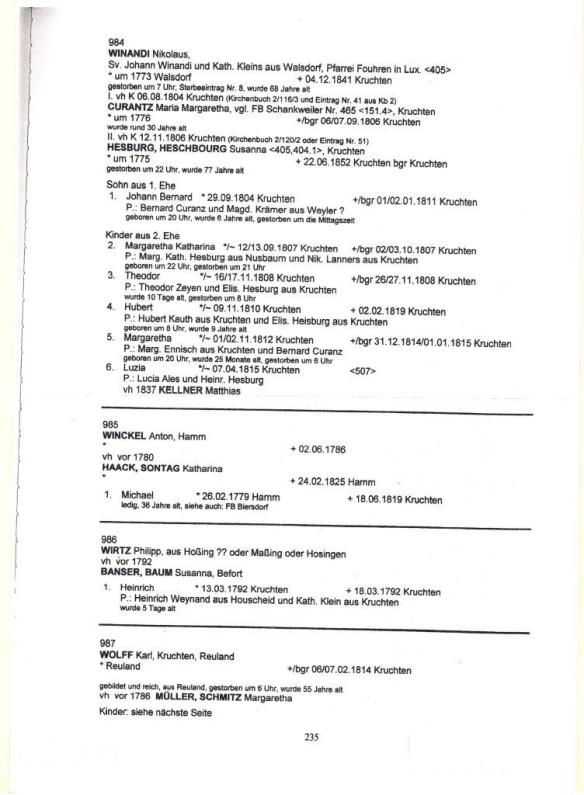 The second page of Theresa’s family. It says that Theresa’s sister Maria Theresa was also married to Peter Konzen, but that’s a mistake and it doesn’t show it on the Konzen page.