On our third day in Chickasaw, we started at the Chickasaw County Courthouse in New Hampton.  We wanted to look for birth, marriage, death, land, and probate records at the courthouse, but because of time constraints and the abundance of records for Konzens, Pitzes, and Rieses there was no way we could’ve gotten all of those records even if we had the whole day to spend there.  But thanks to the wonderful help of the county recorder’s office, we still managed to come away with copies of dozens of records.  We’d sent Sandy to another office to search for wills and probate records and she found some for John G. Konzen (Mathias’s son) along with some of our other relatives.  However, that office closed early on a Friday so we had to return on Monday morning and take the microfiche of the records to the New Hampton Library to make copies.

Alfred M. Roths (grandson of Peter Pitz [1836-1885] who was the brother of Catherine Pitz Konzen my great great grandmother) and his wife Caroline.

Elmer J Pitz (grandson of Joannes Pitz [1842-1925] who was the brother of Catherine Pitz Konzen) & his wife Hazel. 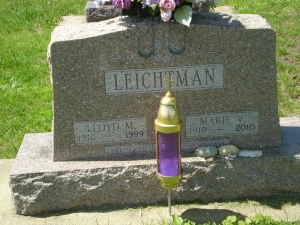 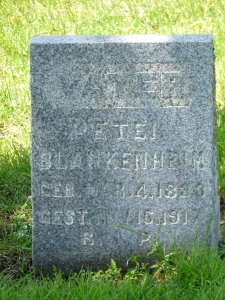 After we finished with St. Mary’s Cemetery, we took a quick drive through Graceland City Cemetery searching for possible relatives.  Sandy or Michelle barreled out of the car when ever someone would shout out “Found one!”  I took pictures from the car and pretended to leave the girls a few times – since jumping in and out of a car at a cemetery wasn’t exciting enough : )

After our cemetery drive through, we picked up some copies at the courthouse and headed towards Dubuque.  We stopped in Farley at St. Joseph’s Catholic Cemetery and despite all of our searching, we couldn’t find Michelle’s great great grandpa Mathias/Mathew Konzen and his wife Katherine Schmitt.  Well, Michelle and I searched.  For most of our time at the cemetery, Sandy was actually bonding with an angel. 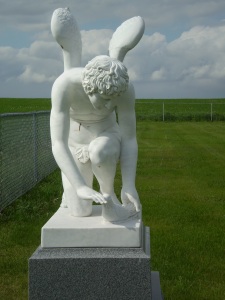 At the end of our search through Farley, we finally gave up on finding Mathias/Mathew Konzen and his wife.  Later we realized that his grave had not sunk or disappeared, but they were buried at Holy Cross Cemetery.  So he’s one Konzen that isn’t really lost!

1 thought on “6 Days with my Konzen cousins: Day 3 – Another Konzen Lost & an Angel Found”